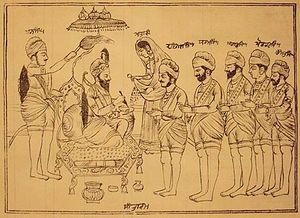 The Brahmins, particularly the inhabitants of Kashmir, looked for some dynamic leadership to fight this subversion.

The Brahmins of Kashmir approached Guru Tegh Bahadur (1621-1675), the ninth in the line of Sikh Gurus, who was on the throne of the Sikh religion. They asked him for guidance on combatting the atrocities committed by the Mughal Emperor.

At the time of their meeting, Guru Tegh Bahadur's nine year old son, Gobind Rai, was sitting beside him. As Guru Tegh Bahadur went into a deep state of contemplation, his young son asked the reason of his repose. Guru Tegh Bahadur said that the matter was of vital importance; the world is aggrieved by oppression; and no brave man had yet come forward who was willing to sacrifice his life to free the earth from the burden of' Aurangzeb's persecution of Hindus. Young Gobind Rai replied: "For that purpose who is more worthy than thou who art at once generous and brave." So after entrusting the Guruship to Gobind Rai, Guru Tegh Bahadur proceeded towards Delhi, the seat of the Mughal Empire.

Upon reaching Delhi, the Guru and his loyal attendants were immediately imprisoned by Aurangzeb. While in prison, Guru Tegh Bahadur foresaw the beginning of his ecclesiastic journey. To test his son's courage and capability to carry on the Guru's mission, he wrote him saying, "My strength is exhausted, I am in chains and I can make not any efforts. Says Nanak, God alone is now my refuge. He will help me as He did his Saints." In reply young Guru Gobind Rai wrote: "I have regained my Power, my bonds are broken and all options are open unto me. Nanak, everything is in Thine hands. It is only Thou who can assist Thyself."

Guru Teg Bahadur offered his life for the freedom of conscience and conviction of anyone belonging to a faith other than his own. His spirit of sacrifice and courage was kindled into the heart of Gobind Rai.

Hundreds of people gathered around the place where Guru Tegh Bahadur was martyred in Delhi. The executioner abandoned the Guru's body in the open. No one came forward openly to claim the body to perform religious rites. Even ardent disciples withdrew unrecognized. Taking advantage of the stormy weather that followed the execution, two persons covertly took the body of Guru Tegh Bahadur for cremation. This cowardice fomented in Gobind Rai an urge to endow his Sikhs with a distinct identity.

With the criteria of courage and strength to sacrifice, Gobind Rai became the tenth Sikh Guru. He wanted to instill these principles in his downtrodden followers. He wanted to uplift their morale to combat the evil forces of injustice, tyranny, and oppression.

Every year at the time of Baisakhi (springtime), thousands of devotees would come to Anandpur to pay their obeisance and seek the Guru's blessings.

Gurū Gōbindh Rai var 33 år gammel da han fekk andeleg inspirasjon til å sette planene sine ut i livet. In early 1699, months before Baisakhi Day, Guru Gobind Rai sent special edicts to congregants far and wide that that year the Baisakhi was going to be a unique affair. He asked them not to cut any of their hair -- to come with unshorn hair under their turbans and chunis, and for the men to come with full beards.

On Baisakhi Day, March 30, 1699, hundreds of thousands of people gathered around his divine temporal seat at Anandpur Sahib. The Guru addressed the congregants with a most stirring oration on his divine mission of restoring their faith and preserving the Sikh religion. After his inspirational discourse, he flashed his unsheathed sword and said that every great deed was preceded by equally great sacrifice: He demanded one head for oblation. After some trepidation one person offered himself. The Guru took him inside a tent. A little later he reappeared with his sword dripping with blood, and asked for another head. One by one four more earnest devotees offered their heads. Every time the Guru took a person inside the tent, he came out with a bloodied sword in his hand.

Thinking their Guru to have gone berserk, the congregants started to disperse. Then the Guru emerged with all five men dressed piously in white. He baptized the five in a new and unique ceremony called pahul, what Sikhs today know as the baptism ceremony called Amrit Shakna. Then the Guru asked those five baptized Sikhs to baptize him as well. He then proclaimed that the Panj Pyare -- the Five Beloved Ones -- would be the embodiment of the Guru himself: "Where there are Panj Pyare, there am I. When the Five meet, they are the holiest of the holy." The Guru did not cut off the heads of any of them. He had used a goat's blood and wiped his sword on it to make it seem as if he had actually done a beheading. This was to prove the devotion of his Sikhs; he wouldn't kill his most faithful Sikhs, or anybody who did not deserve to be punished. Those who were ready to give themselves up to their Guru were the bravest and most devoted. They were chosen to begin the Khalsa Panth. Guruji joined the Khalsa Panth after his devoted Sikhs, and they led the Khalsa alongside the Guru.

He said whenever and wherever five baptized (Amritdhari) Sikhs come together, the Guru would be present. All those who receive Amrit from five baptized Sikhs will be infused with the spirit of courage and strength to sacrifice. Thus with these principles he established Panth Khalsa, the Order of the Pure Ones.

At the same time the Guru gave his new Khalsa a unique, indisputable, and distinct identity. The Guru gave the gift of bana, the distinctive Sikh clothing and headwear. He also offered five emblems of purity and courage. These symbols, worn by all baptized Sikhs of both sexes, are popularly known today as Five Ks: Kesh, unshorn hair; Kangha, the wooden comb; Karra, the iron (or steel) bracelet; Kirpan, the sword; and Kachera, the underwear. By being identifiable, no Sikh could never hide behind cowardice again.

Political tyranny was not the only circumstance that was lowering peoples' morale. Discriminatory class distinctions (--the Indian "caste" system--) promoted by Brahmins and Mullahs were also responsible for the peoples' sense of degradation. The Guru wanted to eliminate the anomalies caused by the caste system. The constitution of the Panj Pyare was the living example of his dream: both the high and low castes were amalgamated into one. Among the original Panj Pyare, there was one Khatri, shopkeeper; one Jat, farmer; one Chhimba, calico printer/tailor; one Ghumar, water-carrier; and one Nai, a barber. The Guru gave the surname of Singh (Lion) to every Sikh and also took the name for himself. From Guru Gobind Rai he became Guru Gobind Singh. He also pronounced that all Sikh women embody royalty, and gave them the surname Kaur (Princess). With the distinct Khalsa identity and consciousness of purity Guru Gobind Singh gave all Sikhs the opporunity to live lives of courage, sacrifice, and equality.

The birth of the Khalsa is celebrated by Sikhs every Vaisakhi Day on April 13. Vaisakhi 1999 marks the 300th anniversary of Guru Gobind Singh's gift of Panth Khalsa to all Sikhs everywhere.

To mark the celebrations, devotees, irrespective of their religion, throng gurdwaras - the Sikh place of worship. The celebrations start early as devotees, with flowers and offerings in their hands, proceed towards the gurdwaras and temples before dawn. Processions through towns are also common. Vaisakhi is the day on which the Sikh Nation, the Khalsa (The Pure Ones) was born and Sikhs were given a clear identity and a code of conduct to live by. The event was led by the last living Guru, Guru Gobind Singh Ji, who baptised the first Sikhs using sweet nectar called Amrit. Around the world at Baisakhi time, Sikhs reflect on the values taught to them by their Gurus and celebrate the birth of the Khalsa.